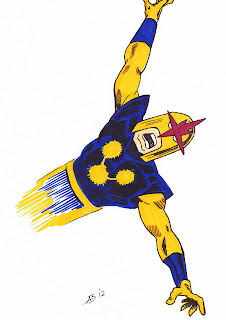 A little try out with some of the wife's markers. Did my best rendition of the cover of The Man Called NOVA #3 by the incredible Sal Buscema. If you are one of the people who have only met "Nova" as a punk ass named Sam on The Ultimate Spider-Man Disney XD don't hold that against the REAL Nova which is a bad ass named Richard Rider who has been kicking ass in the Marvel Universe since the 70's. 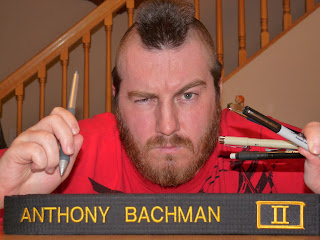 We also have a new picture that I took the opportunity of my Halloween haircut to get done. Art supplies along with my 2nd degree black belt. That's right, just cause a guy reads and makes comics doesn't mean he can't start some shit!
Posted by Anthony Bachman at 10:16 PM

Dig the Nova drawing! and great hair do! I'm balding...so I can only rock...bald. :P