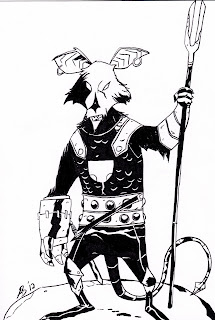 Like a rat from a sinking ship, or a Rat Templar even. Ha! No this is in fact a re-drawing of a page from The Mice Templar with art by the astounding Michael Avon Oeming. Always give credit people. This was just an exercise in fun and practice for inking with my brush pen. I did a rough layout of the pencils from Oemings page in The Mice Templar and than I went straight to my brush pen and just tried to have fun with it. The easiest way  to tell that it's not a straight dupe or copy is to look at the ears - after I scanned it in I realized I completely forgot to put any shadow in the right ear, I'm a goof.

Onto other things. I have a question for anyone who reads this and is willing to leave a comment. My friend Colin and I have an idea for a comic. We have what could be a really great story and we have the idea of taking it all the way to publication if possible. We also had the idea of doing a weekly/semi-weekly podcast along the way to discuss out trials and tribulations as we go. The goal is to have the podcast go along with comic and then hopefully continue after we finish the first comic as Colin and I discuss comics, movies, pop culture, whatever comes into our sinister little heads. But here is where the question comes in. The Question For You?


WHAT THE HELL DO WE CALL OUR PODCAST?

So bear in mind that we want the name to work for a comic book podcast about the creation of a comic by two total amateurs and continue on even after we finish the comic. So below is the list of names we have been kicking around, let us know what you think. Are any of them striking a nerve with ya? Any of them sound good? Do you have an idea better than any we have come up with so far? Let me know in the comments and I'll pass the info along to Colin.

Possible Podcast Names:
My First Comic Book
Comikazes
The Trouble with Scribbles
The Next Element
The Last Element
Fanboy Go!
Posted by Anthony Bachman at 7:51 PM

Comikazee would be great. My suggestion (which doesn't mean I don't like yours) would be 'Drowning in Ink'

Comikaze I did like except that it was the name of an expo about comic book podcasts that got shut down I believe. Drowning in Ink is nice, works for many aspects of making a comic. Nice, thanks.