71 - The Flash with Black Dynamite or Why it's all Kevin Smith's fault! 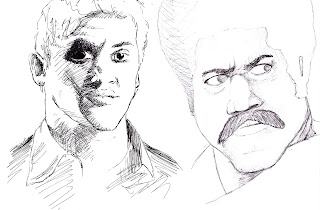 These sketches are all Kevin Smith's fault, which I believe to be a good thing, but let me explain. I don't think I have ever brought any attention to the podcasts I listen to and thought now would be a good time.

My iPod is usually full of episodes downloaded from the SModcast Podcast Network that I listen to while at work mainly during the time that I am processing mail. These podcast make the day go by faster and they are extremely entertaining. SModcast with Kevin Smith and Scott Mosier is the grand-daddy of them all, really entertaining stuff. Then there's Tell Em Steve Dave, Blow Hard, Plus One, Puck Nuts, Hollywood Babble-On, Jay and Silent Bob Get Old and the two that led to these sketches; Bagged and Boarded and Red State of the Union.

Red State of the Union is Kevin Smith's new class on film podcast that has been filled with great interviews with people that worked on the film Red State. If you really dig on film this is a great podcast to listen to and learn a bit about how this film was created. I just listened to the episode starring Kyle Gallner and enjoyed hearing all about this kids journey to Hollywood and his entry into the acting world. Kyle first caught my attention as he did a lot of comic fans when he appeared as Bart Allen a.k.a. Impulse on Smallville, great stuff. Listening to that episode I realized he was also in Jennifer's Body and the new Nightmare on Elm Street remake, whether or not you think they were great movies I enjoyed them and Kyle put together some cool character work in these. Now he's playing what sounds to be an integral role in Red State which I can't wait to see. I tried a quick sketch last night of a picture I found of Kyle Gallner and have to say I like the sketch but I don't think I got even a bit of the likeness. But 15 minutes with a pen and I did end up with a pretty good head shot, the proportions came out to my liking.

Next we have Bagged and Boarded with Matt Cohen and Brendan Creecy, a real funny podcast with a couple of geeks that have a lot of the same interests I do so I find the episodes to be mini laugh-a-thons and fairly informative, they introduced me to Team Unicorn, check it out. The new episode had a great interview with Michael Jai White a.k.a. Spawn, Tyson, and the super cool Black Dynamite! They had a nice sit down with Michael and had a great conversation about the Mortal Kombat mini-film and the possibility of a second Black Dynamite, the world will get funkier! Any who, I was digging on the episode and thought tonight I would throw down a quick sketch of the man with the kung-fu koolness! 20 mins with a different pen and I am quite happy with the resulting likeness.

If all that isn't enough then after you listen to all the SModcasted podcasts you can also check out The Walking Dead Cast, The Devil and Me, Around Comics, Word Balloon, and 11 O'Clock Comics. I have listened to a couple hundred hours of these and found them all to be fully enjoyable, get your geek ear on!
Posted by Anthony Bachman at 10:43 PM