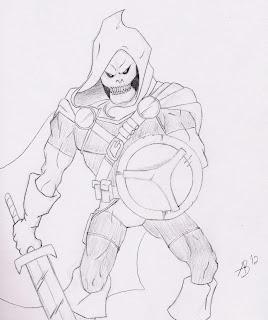 Sunday bloody Sunday. Oh no, wait...it's a lovely day! My boy Marvin and his wife Alicia welcomed a new one into the world today, Ellis Kinney is now a part of the clan. And my favorite little man Wilson now gets to join the world of those who actually have to share. You know it has to be hard at 4 to give up attention and toys, I know I wouldn't like it. Congrats to Marvin, Alicia, and Wilson as Ellis joins in the fun.

Now on to the above drawing. Finished the dang thing last night as I watched the UFC on FOX. One really bad fight, possibly the most uninteresting fight in the last 2 years, and a couple of okay fights that were nothing to write home about. The worst thing was that it seems Chael Sonnen believes he is now in the WWE. The post fight "interview" with Joe Rogan sounded like one of The Rocks old promo spots with the words "Chael Sonnen" inserted everywhere that "The Rock" had been. When you start referring to yourself in the 3rd person and how the guy with the microphone is feeling basking in the glory of your presences it should be after you just did an amazing knockout or out someone into a great submission and got a tap, not after eeking through 3 rounds and "winning" a judges decision. Man I hope this isn't the start of UFC fighters starting to think that they should act like pro-wrestlers. I love my MMA, and I love my pro-wrestling but never the twain shall be confused you know.

Oh yeah I was gonna say something about the drawing, ha! Another sketch for the lovely weekly sketch group over at PencilJack. Fine bunch of lads over there. Started this at the Geeks Who Drink over at Brewforia on Monday night and now here we have the end result. I have to say I enjoyed the hell out of this one, think it turned out pretty well.
Posted by Anthony Bachman at 2:25 PM