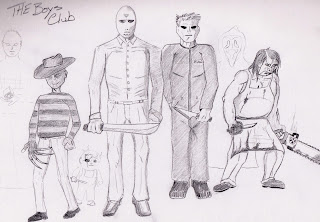 Today's post is actually an old sketch I've been meaning to work on. I called this the Boys Club. Tried to fill a page with Slashers, some of my favorite guys, and thought it was fairly noticeable that all the great slasher movie killers are guys. One of these days there really needs to be a well written female slasher.

Anywho, this year I have decided to increase my posts. I know the more I draw the better I will get, simple as that. New Years resolutions are usually really hard to keep and that is why I put mine off for a bit this year. Last year was fairly simple. I looked at my blog posts for 2010, 31 total, and set the reasonable goal of posting more in 2011. When I easily met that goal I decided to up it to at least one post a week for the year of 2011. As of the end of the year I had a nice big old stack of 59 posts, goal met.

So where does that put me. I guess simple goal this year will be a minimum of 60 posts. If that proves to easy, might have to raise it again. More drawing, more posts, more chances for people to see what I'm working on and hopefully more people will like what I'm doing.

Happy New Year everyone, now get on it.
Posted by Anthony Bachman at 8:54 PM