112 - looking at the Mutant! or hey ain't nothing wrong with Ultimate Spider-Man! 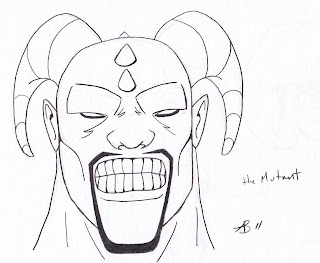 Keep on cooking through August! Well 2 days in and doing well. Here we have the front view of the mutant character, nice horns, small forehead, high set eyes with a big ass jaw. More loving for my Hart book, I think I'm finally starting to pick up a little speed.

Bonus section - I've just got to put my 2 cents in about this whole new Ultimate Spider-Man thing. I read the USA Today article and it's a nice, short, well written article that first completely spoils what probably would have been a great reveal for people that planned on buying Ultimate Fallout #4 tomorrow when it actually hits comic shops, and second has given rise to a thousand idiots that feel the need to spout off about a character change.

First - damn it quit giving up details about comics to the damn media! Okay I know this one is going to raise Marvel's sales numbers which will keep the Mouse happy so this is how things will probably be from now on so there is no chance of fighting it. But damn, can't they find a way to bring in new readers without telling the stories in the comics I was going to buy before they come out?

Second - everyone of the people that put up a comment on the USA Today article need to ask themselves 1 question, are you going to buy the new Ultimate Spider-Man comic when it comes out and read it as a fan? If not, shut up, no one cares, you are complaining about a product that you don't buy. I could give a damn who is on the cover of the next Glamour magazine, I'm not going to buy it so my opinion of their choice of cover girl has no bearing. For those of us that are Spider-Man fans, and specifically Ultimate Spider-Man fans, we hopefully all feel as I do that it's great to have new Ultimate Spides stories after the great ending that Brian Michael Bendis gave us to the Peter Parker of the Marvel Ultimate universe. I have been reading Amazing Spider-Man for years, love the character. I own every single issue of Ultimate Spider-Man and have been reading it from launch, love the book, love the character. Ultimate Spider-Man and Amazing Spider-Man are 2 very different Peter Parker's, and I found that after 5 issues of Ultimate Spider-Man that that was a great and wonderful thing. If you are a Spider-Man fan then do the only thing that can be asked of the fans, read the first issue and then decide if it's a story for you. All this uneducated prejudging is a bit ridiculous. And just remember, Miles Morales isn't even the first non-Peter Parker Spider-Man with a different ethnicity people! I own a full run of Spider-Man 2099 by the amazing Peter David that starred Miguel O'Hara and that book rocked! Give Miles Morales a chance and let's see what Bendis can do with him. I have my fingers crossed that the Spider family is about to get another great member, but I could be wrong, either way I won't know until I start buying and READING the book.

I'll now step down from and put my soap-box away. Thank you.
Posted by Anthony Bachman at 6:56 PM