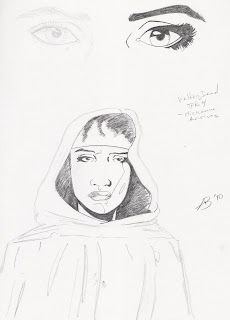 And we get the good with the bad. Good for me I finished another page and bad for the world as The Walking Dead Season 1 has come to an end. I thought it would be a fitting tribute time so after doing my natural/realistic eye versus simplified female eye I decided to grab my Walking Dead TPB #4 and try to re-draw one of the first images that Charlie Adlard did of my favorite TWD character, Michonne. She hasn't shown up on the TV show yet but we call all count on her making an appearance as those of us that have read the novels know they won't be able to have TWD without Michonne and her fine blade skills. The woman is dangerous and deadly.
And now that season 1 has come to an end and we have to wait months for season 2, it's sad, but at least we all have something great to look forward to. If you are a fan of The Walking Dead or just zombies in general I would suggest a fantastic way to get your zombie fix whilst awaiting the next season would be to over to iTunes and download Walking Dead Cast. It's full of great zombie goodness and the hosts are fans of Kirkman's The Walking Dead. You can also check them out at walkingdeadcast.com, cool stuff to check out. And remember, in the word's of the walkingdeadcast folk, don't get bit.
Posted by Anthony Bachman at 12:30 AM