60 - Scott Pilgrim vs all the movies out this weekend... 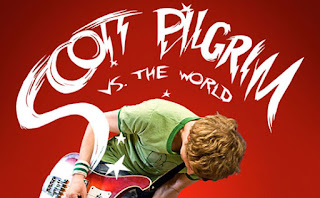 Enjoyed the hell out of this. Edgar Wright has now done for teen comedies with Scott Pilgrim what he did for zombie flicks with Shaun of the Dead. This one will have to have it's own genre, it just won't fit anywhere, fun as hell. The soundtrack, the one liners, the super-powered vegans, the editing-this movie is worth seeing for any one of this reasons and it has all of them!
Any who doubted the power of Michael Cera will have to admit his ability after seeing this flick, he's still the lovable loser you cheer for but in this movie he seems to pull it off in a completely different fashion, it's enjoyable just to hear the cadence he gives to the characters speech, stumbling, interrupted, and naturally unfiltered is how it comes across.
We can also not forget the other great appearances in this film, to many to get into but the girls in Scott Pilgrims life our brought to the screen by some fearsome actors, cute + powerful equal Scott being in trouble from credits to credits.
If you at home doing nothing right now, get up, get out and go see this movie. You won't regret it.

P.S. And just so we're clear I am still planning on seeing The Expendables and The Other Guys, Pilgrim was the group choice for our Friday night outing.
Posted by Anthony Bachman at 2:51 PM