58 - Friday night was the right night for Predators! 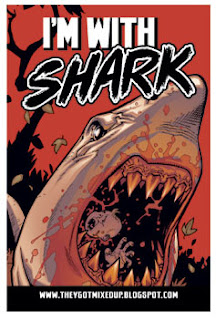 And away we go with another round of Spoiler Alert Theater! Round 4 if I'm not mistaken. Went out for a nice dinner and a movie with the wife on Friday and the pic was Predators.
Predators-now first off I have to say I'm a huge fan of Robert Rodriguez and don't like funny faced ol' Adrien Brody at all so this movie started off as a toss up for me. Great starting scene, the thing opens with the characters awakening in free fall, wind rushing and the ground rushing up to meet you, hell of a wake up call. Ignoring Brody's goofy looks, there are some great actors in this flick and some people in roles you wouldn't normally expect to see them in. Great casting gives up a bunch of bad asses with various weapons, good stuff.
All in all the movie is fun, great action, and some really cool effects. When you get the time check it out, for fans of the first 2 Predator flicks this is a must see.

Bonus Material - to start I just have to let everyone know that even though I do enjoy Jason Howard's work I am firmly with Shark, Ryan Ottley is one of my fav creators! If you don't know what I'm referring to, and the Shark pic above doesn't tell you enough, then head over to: www.theygotmixedup.blogspot.com to learn a thing or ten, fun for the whole family.
And the next - 1 problem, awful commercials, 2 offenders - Volkswagen tv spots and KIA dumbass radio ads.
A: Volkswagen - these stupid commercials that have people punching each other as some weird looking SUV drives around a neighborhood, unacceptable. You can only play slug bug when you see a Volkswagen Bug, a Beetle, not just any old Volkswagen. You hit me after seeing something that isn't a Bug, you better cover up cause you just picked a fight.
B: KIA - they have this awful radio spot with a gravelly voiced guy trying to convince us that Idaho cowboys are driving around in a KIA vehicle that he refers to as "smart and sassy". If someone is driving around in a KIA, a smart and sassy KIA, they might be driving their boyfriend up to Brokeback Mountain, but that in kn way makes them a cowboy.
Posted by Anthony Bachman at 8:13 PM

real cowboys ride a horse, or drive a pickup, one that's as old as us at least. As for the VW ad, yeah it's beetles and vans if you play that way, but no other VW, hit me for a rabbit, fox, jetta, or golf and you're in for it! lol